Why does missing data matter?

If you ever worked on raw data collected from a survey or a sensor that is not cleaned yet, you might have also faced missing data. Let’s think about a dataset of age, gender, and height as below. You want to use both age and gender to predict height, but you have some data points that either have only age or only gender. What would you do in this case?

Normally, you don’t want to remove the entire observation because the rest of the fields can still be informative. Also, when you have lots of variables that are missing in different observations, the chances are you will have to remove the majority of data points and end up being left with limited data to train a model. Even if you manage to build a model, the model will have to know how to handle missing data in production, otherwise, it will freak out and refuse to make any prediction for new data with a missing field!

Therefore, we would want to perform missing data imputation and this post is about how we can do that in Python.

What are the options for missing data imputation?

Although they are all useful in one way or another, in this post, we will focus on 6 major imputation techniques available in sklearn: mean, median, mode, arbitrary, KNN, adding a missing indicator. I will cover why we choose sklearn for our missing imputation in the next post.

In this post, we will use the trainset from the house price data from Kaggle. The data is preprocessed so that string value ? is transformed into NaN.

There are 80 columns, where 79 are features and 1 is our target variable SalePrice. Let’s check how many are numerical and categorical as we will apply different impuation strategies to different data types. .select_dtypes() in pandas is a handy way to filter data types.

Next is slitting data. It is important to split the data into train and test set BEFORE, not after, applying any feature engineering or feature selection steps in order to avoid data leakage. Data leakage means using information that is not available in production during training which leads to model performance inflation. As we want our model performance score to be as close to the real performance in production as possible, we want to split the data as early as possible even before feature engineering steps.

Now let’s check which columns have missing data, NaN. .isna() will give you True/False indicator of if element is NaN and .mean() will calculate what perforcentage of True there are in each column. We will filter columns with mean greater than 0, which means there is at least one missing data.

Let’s check which feature has how much missing data. It seems that there are three features (PoolQC, MiscFeature, Alley) that have more than 90% of data missing. In such cases, it might be better to remove the entire feature because they do not provide much information when predicting house price. We could perform feature selection to see if it is worth including them or not. However, it is not the scope of this post, so we will include all of them for now.

First missing data imputation method we will look at is mean/median imputation. As the name implies, it fills missing data with the mean or the median of each variable. 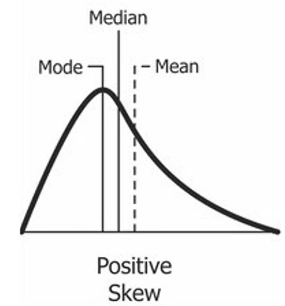 A common practice is to use mean/median imputation with combination of ‘missing indicator’ that we will learn in a later section. This is the top choice in data science competitions.

Below is how we use the mean/median imputation. It only works for numerical data. To make it simple, we used columns with NA’s here (X_train[num_cols_with_na]).

Previously, we mentioned the mean imputation can distort the original distribution. Let’s see how much it changed the data distribution by checking the density plot.

As you can see in LotFrontage, you have a lot more values around the mean after the imputation. The more missing data a variable has, the bigger the distortion is (LotFrontage has 18%, GarageYrBlt has 5%, and MasVnrArea has 0.5% of missing data).

One way to avoid this side effect is to use random data imputation. However, I excluded it from this post as it is not available in sklearn and it is not very production-friendly. It requires the whole populatlion of train data to be available to impute each missing data point.

The second method is mode imputation. It is replacing missing values with the most frequent value in a variable. It can be used for both numerical and categorical.

This time, let’s try it to our categorical variables.

Like the mean/median imputation, mode imputation can also distort the original distribution of a variable. In order to check the difference between before/after the mode imputation, we used bar plot this time as it is for categorical variables.

Let’s take a look at the first variable in the graph, Alley. As you can see, the distribution of the original data and that of the imputated data are very different and the Pave category is over-represented in the imputed data. Ideally the shape of the distribution should be preserved after imputation just like MasVnrType. However, if the majority of the observations is missing, the distribution of a variable can change significantly as does the correlation with other variables. 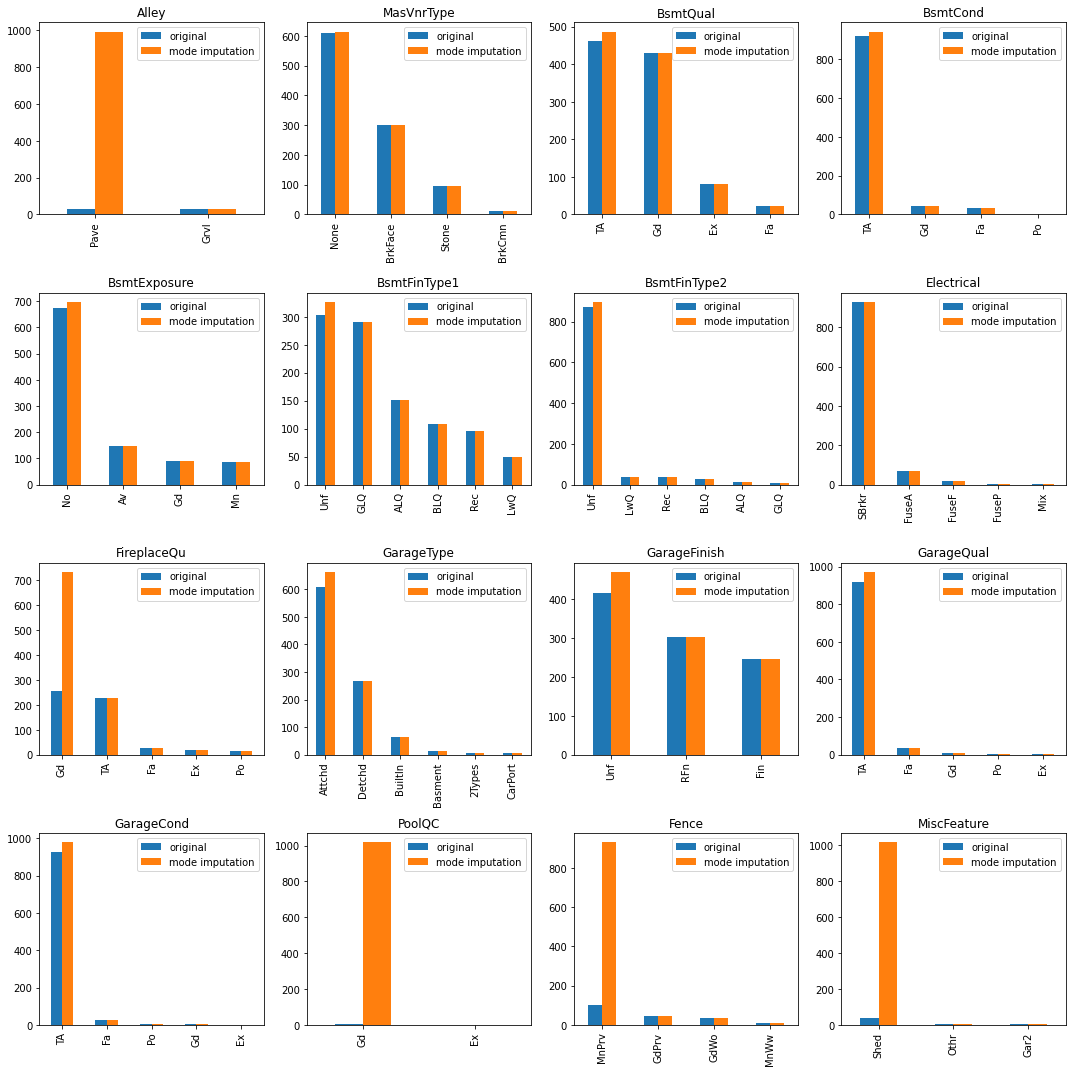 The third method is filling missing values with an arbitrary value outside of the training dataset. For example, if the values in the ‘age’ variable range from 0 to 80 in the training set, fill missing data with 100 (or using a value at the ‘end of distribution’ using mean +- 3*std). If categorical data, use ‘Missing’ as a new category for missing data. It can be counter-intuitive to fill data with a value outside of the original distribution as it will create outliers or unseen data. It indeed is not meant to be used for models that require certain assumptions about data distribution, such as linear regression. It is good for three-based models which will separate missing data in an earlier/upper node and take the missingness into account when building a model.

It can be used for both numerical and categorical and numerical variable is more involved if we need to determine the fill value automatically.

Let’s see how we do for categorical variables first.

Filling missing values with a new category called ‘missing’ or ‘Missing’ is a very common strategy for imputing missing data in categorical variable.

You can see there is now a new category ‘Missing’ in the imputed dataset. 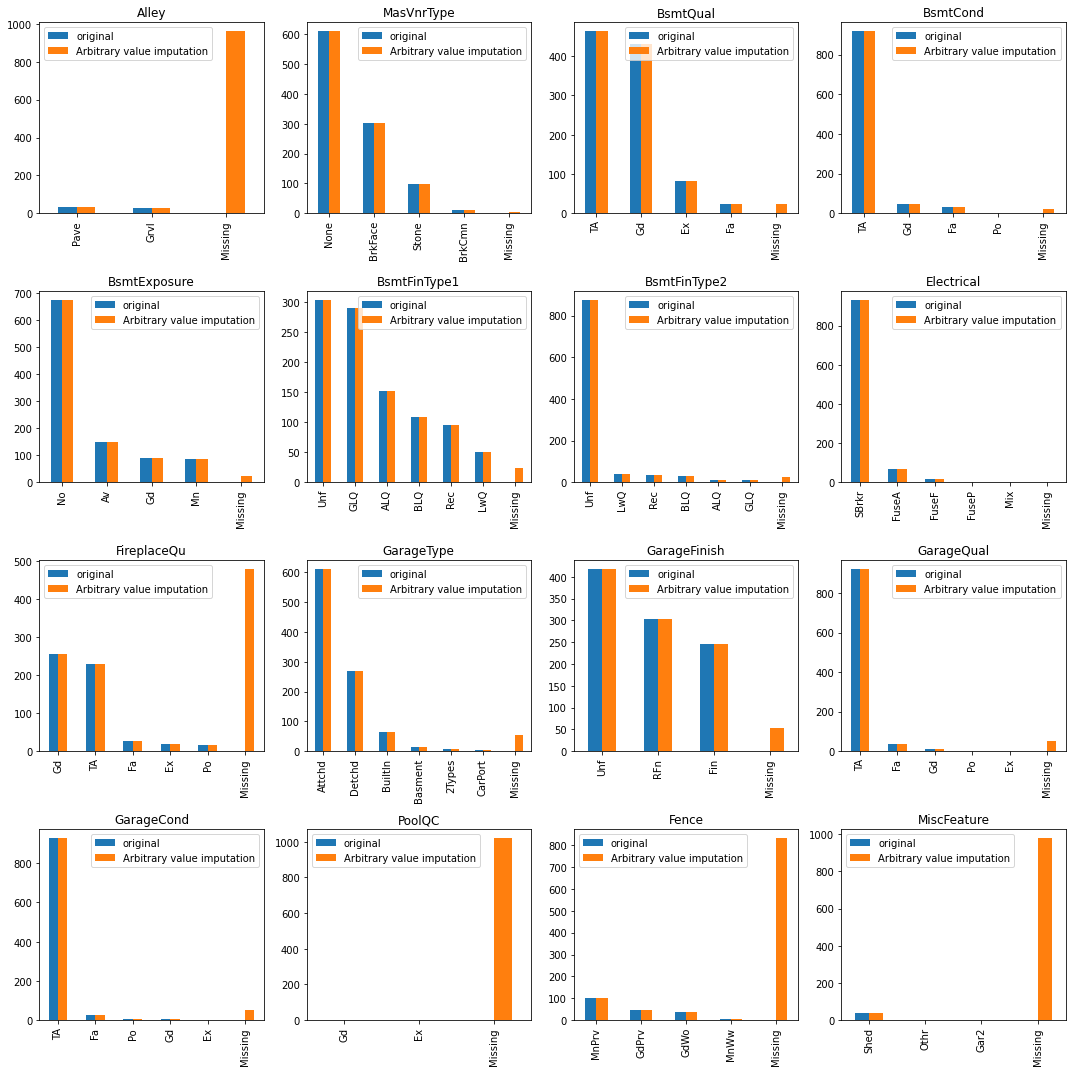 When determinining what value to use for numerical variables, one way to do is ‘end of distribution’ method.

When we check the plot below, we now have a small peak at around 150, which is the value that is determined by our get_end_of_dist function. This method definitely distorts the original data distribution and should be used carefully for only appropriate models. 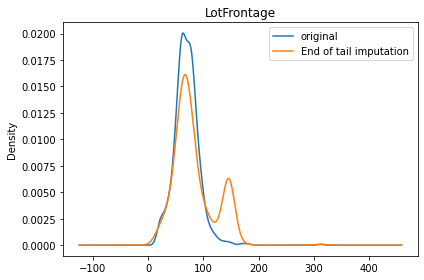 KNN imputer is much more sophisticated and nuanced than the imputation methods described so far because it uses other data points and variables, not just the variable the missing data is coming from. KNN imputer calculates the distance between points (usually based on Eucledean distance) and finds the K closest (=similar) points. And then, estimates the missing value given what other points have for the variable. Note that this can only be used for numerical variables.

Adding a binary missing indicator is another common practice when it comes to missing data imputation. This is used with other imputation techniques, such as mean, median, or mode imputation.

The obvious question to follow next is then, “What method should we use?” The answer is tricky as there is no hard answer to what the best method is for every case.

The most commonly used technique, as described above, is using the mean/median imputation with combination of missing data indicator for numerical variables and filling missing data with the new ‘Missing’ category for categorical variables.

However, it is wise to still investigate different methods by cross validating different combinations of methods and see which method is most effective to your problem. In the next post, we will learn how to do it with sklearn and why it is useful to use sklearn for imputation rather than normal Pandas functions.