Recently, I came across a few articles mentioning Facebook’s Prophet library that looked interesting (although the initial release was almost 3 years ago!), so I decided to dig more into it.

Prophet is an open-source library developed by Facebook which aims to make time-series forecasting easier and more scalable. It is a type of generalized additive model (GAM), which uses a regression model with potentially non-linear smoothers. It is called additive because it adds multiple decomposed parts to explain some trends. For example, Prophet uses the following components:

In this post, I will explore main concepts and API endpoints of the Prophet library.

In this post. We will use the U.S. traffic volume data available here, which is a monthly traffic volume (miles traveled) on public roadways from January 1970 until September 2020. The unit is a million miles.

Prophet is hard-coded to use specific column names; ds for dates and y for the target variable we want to predict.

When plotting the original data, we can see there is a big, growing trend in the traffic volume, although there seems to be some stagnant or even decreasing trends (change of rate) around 1980, 2008, and most strikingly, 2020 . Checking how Prophet can handle these changes would be interesting. There is also a seasonal, periodic trend that seems to repeat each year. It goes up until the middle of the year and goes down again. Will Prophet capture this as well? 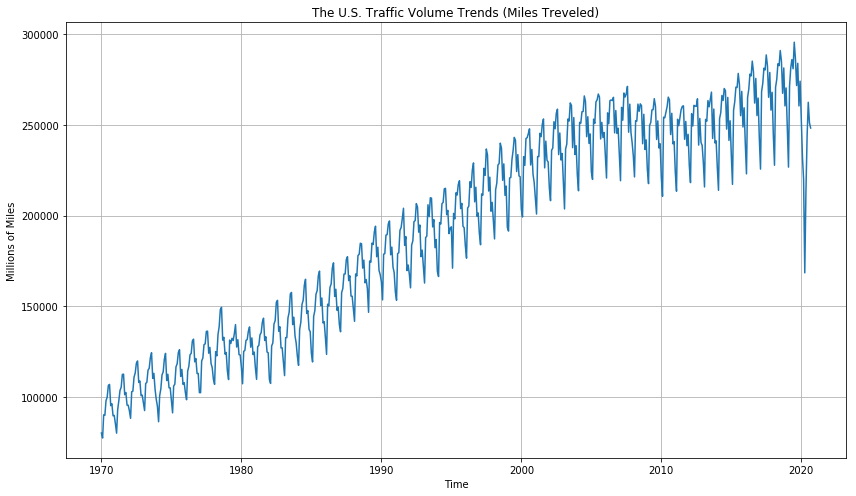 Let’s train a Prophet model. You just initialize an object and fit! That’s all.

When making predictions with Prophet, we need to prepare a special object called future dataframe. It is a Pandas DataFrame with a single column ds that includes all datetime within the training data plus additional periods given by user.

The parameter periods is basically the number of points (rows) to predict after the end of the training data. The interval (parameter freq) is set to ‘D’ (day) by default, so we need to adjust it to ‘MS’ (month start) as our data is monthly. I set periods=21 as it is the number of points in the test data.

Prophet has a nice built-in plotting function to visualize forecast data. Black dots are for actual data and the blue line is prediction. You can also use matplotlib functions to adjust the figure, such as adding legend or adding xlim or ylim. 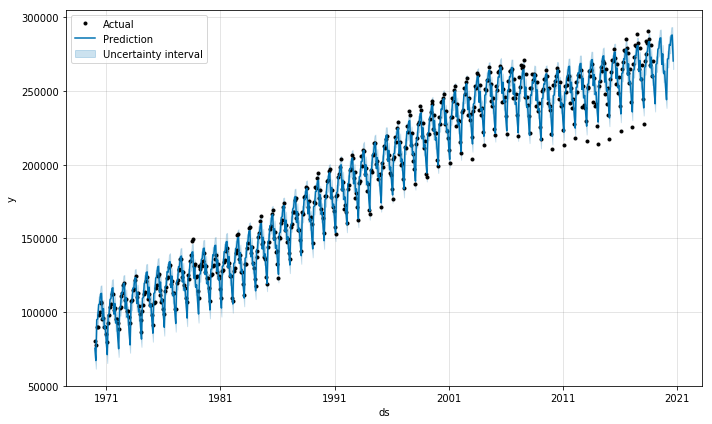 So, what is in the forecast DataFrame? Let’s take a look.

There are many components in it but the main thing that you would care about is yhat which has the final predictions. _lower and _upper flags are for uncertainty intervals.

Other columns are components that comprise the final prediction as we discussed in the introduction. Let’s compare Prophet’s components and what we see in our forecast DataFrame.

Prophet also has a nice built-in function for plotting each component. When we plot our forecast data, we see two components; general growth trend and yearly seasonality that appears throughout the years. If we had more components such as weekly or daily seasonality, they would have been presented here as well. 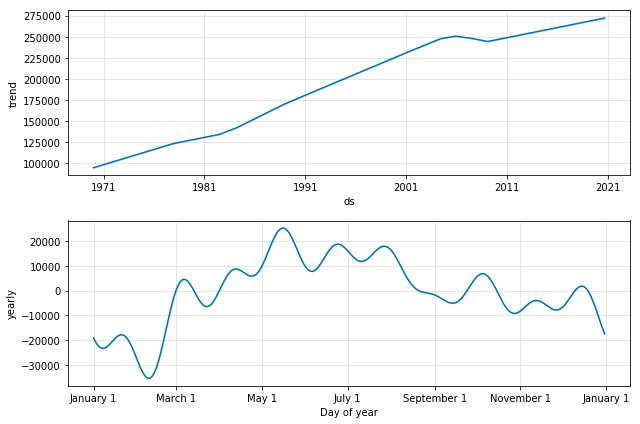 4.1. Evaluate the model on one test set

How good is our model? One way we can understand the model performance, in this case, is to simply calculate the root mean squared error (RMSE) between the actual and predicted values of the above test period.

However, this probably under-represents the general model performance because our data has a drastic change in the middle of the test period which is a pattern that has never been seen before. If our data was until 2019, the model performance score would have been much higher.

Alternatively, we can perform cross-validation. As previously discussed, time-series analysis strictly uses train data whose time range is earlier than that of test data. Below is an example where we use 5 years of train data to predict 1-year of test data. Each cut-off point is equally spaced with 1 year gap. 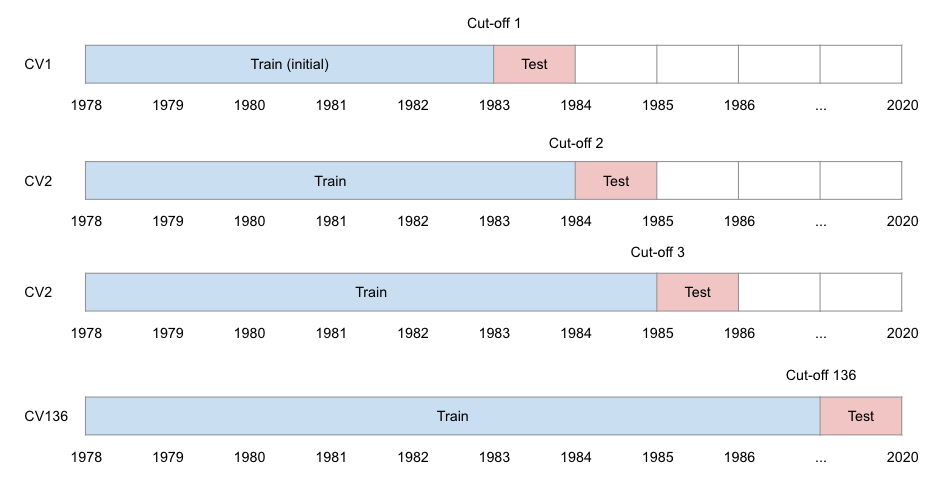 Make sure to define these parameters in string and in this format: ‘X unit’. X is the number and unit is ‘days’ or ‘secs’, etc. that is compatible with pd.Timedelta. For example, 10 days.

You can also define parallel to make the cross validation faster.

This is the predicted output using cross-validation. There can be many predictions for the same timestamp if period is smaller than horizon.

Below are different performance metrics for different rolling windows. As we did not define any rolling window, Prophet went ahead and calculated many different combinations and stacked them up in rows (e.g. 53 days, …, 365 days). Each metric is first calculated within each rolling window and then averaged across many available windows.

Another interesting functionality of Prophet is add_changepoints_to_plot. As we discussed in the earlier sections, there are a couple of points where the growth rate changes. Prophet can find those points automatically and plot them! 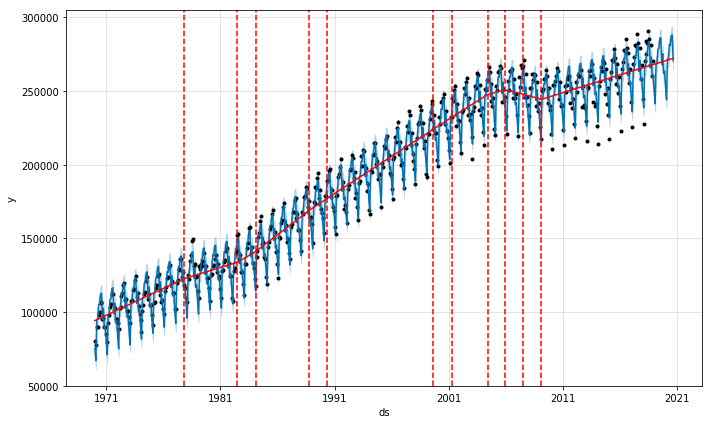 The growth in trend can be additive (rate of change is linear) or multiplicative (rate changes over time). When you see the original data, the amplitude of seasonality changes - smaller in the early years and bigger in the later years. So, this would be a multiplicative growth case rather than an additive growth case. We can adjust the seasonality parameter so we can take into account this effect.

You can see that the blue lines (predictions) are more in line with the black dots (actuals) when in multiplicative seasonality mode. 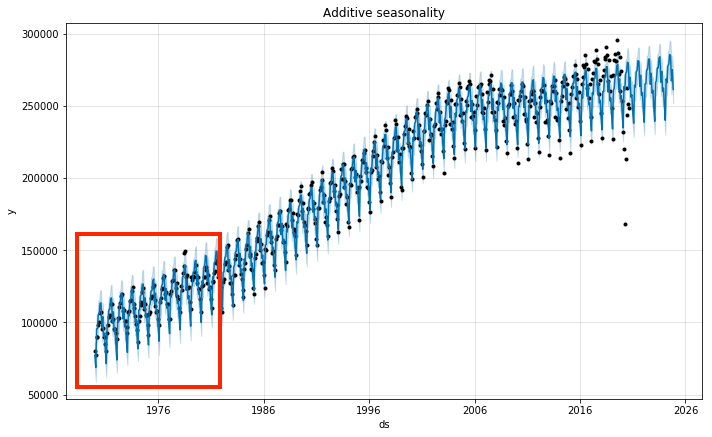 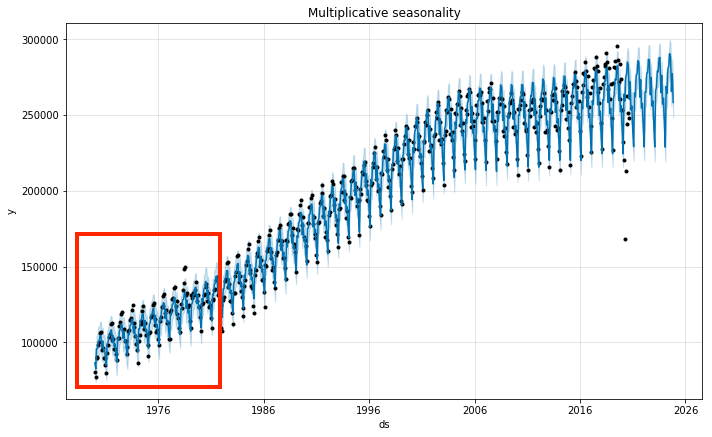 We can also easily export and load the trained model as json.